These Libraries Elevate the Studying Experience 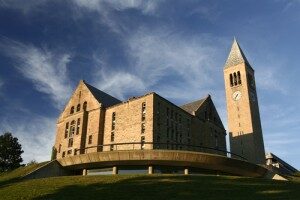 Often times, the library on campus is a dark, windowless building filled with rows of dusty, little-touched books. Quiet, institutional, such libraries do little to inspire great thoughts — more like great naps, really. In other cases, however, the library is the campus centerpiece: an iconic building, the mere image of which brings to mind the school and sparks great dreams of academic glory. Recently, Business Insider did a survey of such campus libraries. While clearly not comprehensive, it does a nice job covering both venerable, ivy-covered brick structures filled with years of history, as well as new glass and steel structures, the floor-to-ceiling windows of which open onto the most scenic vistas on campus.

University of California, San Diego — Geisel Library
UCSD’s main library is named in honor of Audrey and Theodor Seuss Geisel — better known as Dr. Seuss — who donated to the library throughout their lifetimes. The Geisels were long-time residents of La Jolla, the San Diego, Calif. neighborhood that includes UCSD.

University of Chicago — Joe and Rika Mansueto Library
Perhaps the most striking aspect of Mansueto Library is the giant glass dome that encloses the building’s main study space. Underground, the library employs a high-tech storage system, using a robotic crane to quickly retrieve any requested material.

Princeton University — Lewis Library
The Frank Gehry-designed library features a reading room known as The Treehouse due to its tree-top views of the Princeton campus. Located around many of the school’s science buildings, Lewis is supposedly designed to reflect interdisciplinary scientific fields.

Loyola University Chicago — Klarchek Information Commons
Located on the shore of Lake Michigan, the Information Commons offers breathtaking views of the Great Lake and the surrounding area. Designed with environmental concerns in mind, the library’s layout allows for natural heat and cooling in the building.

Cornell University — Uris Library
Cornell’s oldest library, Uris is located at the top of the campus’ “Slope” and contains predominately humanities and social sciences materials. Uris houses a reading room named after the university’s first president — Andrew Dickson White — that is better known as the “Harry Potter” library and is a popular study destination.

University of Michigan — Law Library
Open to all students, Michigan’s law library is located on the university’s central campus and is known for its Gothic architecture. The library has specific strengths in collections related to Native Americans and early American court reports, among other topics, and has several documents from the 14th and 15th centuries.

Johns Hopkins University — George Peabody Library
Housed as a part of the Peabody Institute conservatory in Baltimore, the Peabody Library is a research facility with strengths in documents from the 18th and 19th centuries. Designed by 19th-century architect Edmund Lind, Peabody is still an active library and is also a popular Baltimore-area wedding venue.

Beyond the Emergency Fund: Water, Water Everywhere, but Not a Drop to Drink