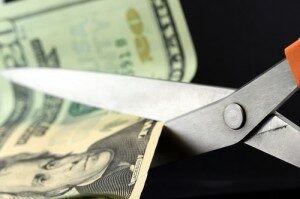 A new report from the Center on Budget and Policy Priorities says that state higher education funding levels are far below pre-recession levels. Some states are not yet done slashing their higher ed budgets. Forty-eight states, except Alaska and North Dakota, spend less per student today than before the recession hit. Overall state higher education spending is down about 23 percent, amounting to just a little over $2,000 per student. Louisiana, North Carolina, Wyoming, West Virginia and Wisconsin made the deepest cuts this year.

Most states have begun in the past year to restore some of the cuts they made to higher education funding after the recession hit. Eight states, though, are still cutting, and in almost all states — including those that are have boosted their support — higher education funding remains well below pre-recession levels. The large funding cuts have led to both steep tuition increases and spending cuts that may diminish the quality of education available to students at a time when a highly educated workforce is more crucial than ever to the nation’s economic future.

Wyoming, West Virginia, Louisiana, Wisconsin, and North Carolina cut funding the most over the last year. Of these, all but Wyoming have cut per student funding by more than 20 percent since the recession hit. In the last year, 42 states increased funding per student, by an average of $449 or 7.2 percent. Deep state funding cuts have major consequences for public colleges and universities. States (and to a lesser extent localities) provide 53 percent of the revenue that can be used to support instruction at these schools. When this funding is cut, colleges and universities generally must either cut educational or other services, raise tuition to cover the gap, or both.

The report goes on to say that since the recession, higher education institutions have:

These sharp increases in tuition have accelerated longer-term trends of reducing college affordability and shifting costs from states to students. Over the last 20 years, the price of attending a four-year public college or university has grown significantly faster than the median income. Federal student aid and tax credits have risen, but on average they have fallen short of covering the tuition increases.

A large and growing share of future jobs will require college-educated workers. Sufficient funding for higher education to keep tuition affordable and quality high at public colleges and universities, and to provide financial aid to those students who need it most, would help states to develop the skilled and diverse workforce they will need to compete for these jobs.

Such funding is unlikely to occur, however, unless policymakers make sound tax and budget decisions in the coming years. While some states are experiencing greater-than-anticipated revenue growth due to an economy that is slowly returning to normal, state tax revenues are barely above pre-recession levels, after adjusting for inflation. To bring higher education back to pre-recession levels, many states may need to supplement that revenue growth with new revenue to fully make up for years of severe cuts.

But just as states have an opportunity to reinvest, lawmakers in many states are jeopardizing it by entertaining tax cuts their states and citizens can ill-afford. For example, Florida — where higher education funding is 30 percent below 2007 levels and tuition at four-year schools is 66 percent higher — is cutting taxes by $400 million in the current 2014 legislative session. Other states are also considering damaging changes to their tax codes that would make it very difficult to reinvest in higher education.