Tricks Stores Use To Get Us To Overpay

While recently catching up on my offline reading, I ran across a small piece in the April 2010 edition of Money magazine. The column features William Poundstone, the author of Priceless: The Myth of Fair Value (and How to Take Advantage of It). The article points out ways to combat stores sometimes gimmicky pricing techniques aimed at getting us to pay more than we normally would for a particular item. 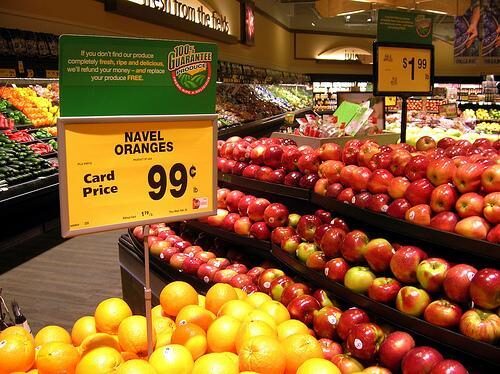 In the article, Poundstone makes the point,

“When you have to estimate the value of something, you use a mental process called anchoring: You decide what’s fair based on what you know.”

That’s exactly what most of us do when we march into stores to pick up a particular item, like a new portable air compressor (a recent item I decided to pick up to inflate tires at home and on the road). In my head, I had an idea of how much a portable air compressor should cost – somewhere in the $30-$50 range. My estimate was loosely based on similarly-sized gadgets I’ve seen, and bought, in home improvement stores, such as mini shop-vacs, cordless tools, etc.

I also took some time to scout around online to determine which model and features I was interested in, and to get an average price from online retailers. Since I was buying the air compressor just before an upcoming trip, purchasing online wasn’t really an option, unless the cost savings were significant enough that I could still pay for expedited shipping and come out ahead (not likely).

Back to my trip to the home improvement big box store. Armed with my Amazon.com print out reflecting the model and price of the Black and Decker Air Station (a safe choice in my price range), I went straight to the hardware area and located the item. It was $39.99, just a dollar more expensive than the online price. After sales tax, the final price was comparable to what I would have paid with online shipping, so I was happy to just buy it in the store and have it for our upcoming trip.

Unfortunately, not all purchasing decisions are created equal. Neither are store sales and signage. Our local Kroger frequently runs 1o-for-$10 deals on particular items throughout the store. In theory, these are great deals. However, they have a way of skewing that anchor Poundstone refers to. Shoppers automatically want to buy more of the item simply because it is marked 10/$10.

I’ve even caught myself falling for this trap with things like spaghetti noodles, condiments, and other 10/$10 goodies Kroger often puts on “sale.” Normally, their store brand ketchup runs between $1.29 and $1.39. We pick one up every couple months when we open the backup from the pantry.

But when those babies go on the 10/$10 deal I feel compelled to clear the store shelves. After all, five bottles of ketchup at $0.29 off is over a dollar in savings! Recognizing I don’t have to buy more than one item doesn’t seem to help either. The 10/$10 offer often compels us to buy more than we would if they were simply price $1.00 each, just as Poundstone mentions in the article.

My shopping trip invariably winds up with me returning home and asking, “What the heck am I going to do with five bottles of ketchup?” Stockpiling is a good idea, but there is only so much room to store this stuff.

A more recent example involves Kroger’s “Buy 8, Get $4.00 Off” promotional. I don’t mean to pick on Kroger; we actually like the store and do nearly all our shopping there. During this promotion various items around the store are tagged with a special sticker. If you buy eight of them, you get $4.00 off of your bill instantly. What a deal! That’s a family-size bag of Doritos!

So what do we do? We run all over the store buying things we don’t need to get up to that magic number of eight “specially marked items.”

How to Avoid Overpaying

When you enter the store, it’s a good idea to take along both a physical list and a mental list. The physical list is an easy one – it’s a list of items you need for meals and snacks over the next week or two. But the mental list is where you’ve anchored some idea of how much these things cost, and how many items you really need.

Armed with both lists, you’ll be able to resist the temptation to pay more, or buy more quantity, than you were willing to before entering the store. And no store promotion can move that anchor.

What other strategies do you use to avoid paying more? Do any of you keep a price book to track the cost of items over time, or from different stores?

*This article appeared in the Carnival of Money Stories: Final Four Edition

Online Masters Degree Programs in Forensics That are the Least Expensive