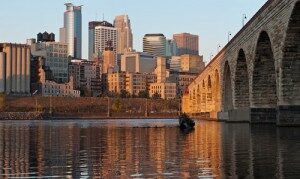 Once you’ve got your college degree in hand, you are free to roam about country. Though some soon-to-be degree holders may already have good jobs lined up, many more will be searching for some time to come. The unemployment rate for the class of 2013, after all, is at 10.9 percent—far above the national average. Still, that’s the lowest unemployment rate for new college graduates since 2007, when the rate was at 7.7 percent.

With the job market improving for this group of Americans, especially in certain parts of the country, where should these new grads go? According to the Fiscal Times, a new study by NerdWallet examined criteria in each major U.S. city—such as the job market, average income, affordability and percentage of young people—all crucial to this cohort, and came up with the 10 places most appealing to new college graduates.

Of course, it’s important for students to note that the job markets in these cities are extremely competitive. And since they’re so popular for young people, even scoring an interview for an entry level job will be fierce. So, if you preferred beer pong over books, these might not be the cities for you.​

1. Washington, D.C.; Median Income for College Grads: $60,104
Though the nation’s capital is one of the more expensive places to live, it also has some of the highest wages. Recent college grads in D.C. earn, on average, $60,104, the second highest annual salary in the country. Washington also has a strong job market, with many opportunities in government as well as in business, science and the arts.

2. Seattle, WA; Median Income for College Grads: $50,578
Seattle is the most educated city in the U.S.: More than 34 percent of its population holds a bachelor’s degree or higher. The top industries include aerospace, information technology, clean technology and health care. It also has one of the highest average incomes for recent college grads.

3. Minneapolis, MN; Median Income for College Grads: $46,525
Minneapolis is home to the most Fortune 500 companies per capita in all of the metro areas in the country, so there are plenty of job opportunities for recent college grads. The Twin Cities of Minneapolis and St. Paul also have one of the highest populations of young people between the ages of 20 and 29, making this area an even more appealing place for recent grads.

4. San Francisco, CA; Median Income for College Grads: $61,426:
Though San Francisco is one of the most expensive places to live, high wages and a strong job market make it incredibly attractive to new graduates. The median income for those with bachelor’s degrees is $61,426, the highest in the country. Major industries include technology, science, media and financial services. The area is home to the country’s biggest tech giants, including Google and Twitter.

5. Austin, TX; Median Income for College Grads: $45,023
Austin is hopping with young professionals – those ages 20 to 29 make up more than 21 percent of the population. It also has the lowest unemployment rate out of all major U.S. cities, with plenty of opportunities for young workers. Major tech corporations like Dell and IBM are in Austin, and it’s one of the most affordable places to live out of all other major cities. It ranked the second lowest on NerdWallet’s Cost of Living Index, just behind Columbus, OH.

6. Atlanta, GA; Median Income for College Grads: $50,862
Atlanta has a range of opportunity for new graduates. The city is driven by trade and transportation, business services, government, education and health services; Atlanta is home to Coca-Cola, Delta Air Lines and The Home Depot.

7. Raleigh, NC; Median Income for College Grads: $45,495
This city has the third most educated population on the list, with 31.9 percent of residents 25 and older holding a bachelor’s degree or higher. Major industries include manufacturing, aerospace, biotechnology and green energy.

8. Boston, MA; Median Income for College Grads: $52,119
Young people apparently love Boston: It has the greatest proportion of young professionals of all large cities. Though the Massachusetts capital is an expensive place to live, young people tend to earn higher wages and the unemployment rate is relatively low. The largest industries are health care, finance and insurance and education.

9. Denver, CO; Median Income for College Grads: $48,133
Denver has one of the most educated populations, with a large percentage of people holding a bachelor’s degree. The Mile-High City has a moderate cost of living, though degree holders tend to earn higher than average wages. The top industries are aerospace and aviation, broadcasting and telecommunications, energy and health care.

10. Columbus, OH; Median Income for College Grads: $44,392
Columbus is the most affordable city in the top 10, according NerdWallet’s Cost of Living Index. It also has one of the lowest unemployment rates. Major industries include manufacturing, logistics, science and technology, and business and financial services. The largest employers include JPMorgan Chase & Co, and Ohio University.