A growing number of nonprofit colleges have become big fish in online education and are targeting a working-adult-student market long-dominated by for-profit institutions. As the competition heats up, better-informed consumers will increasingly seek out online programs based on price and brand strength.

Those were the findings of new research [1] from the Parthenon Group, a strategic consulting firm. Parthenon has conducted previous studies [2] with favorable outcomes for the for-profit sector, but gives nonprofits a bit of an edge in this report [1], which is dubbed “Are the Sleeping Giants Awake? Non-Profit Universities Enter Online Education at Scale.” 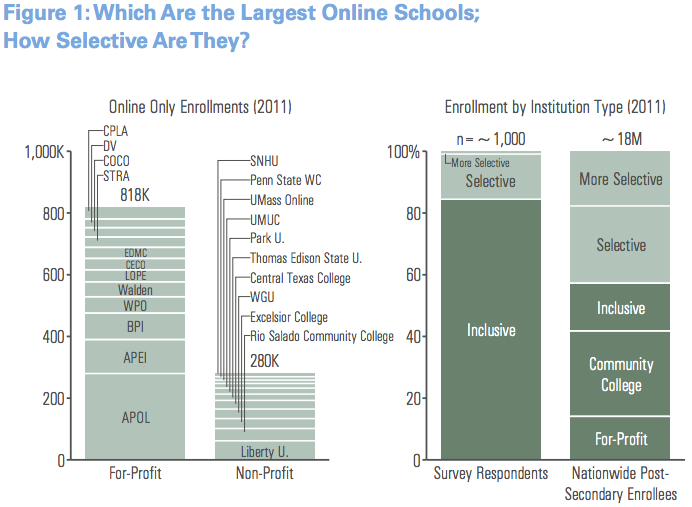 Chris Ross, a partner at Parthenon and the report’s author, said many nonprofits had yet to begin tapping into their potential. For example, even less-selective public universities have plenty of brand appeal in their regions. But relatively few have ramped up their marketing of online programs.

For-profit colleges do much more conventional marketing to attract students, according to the study, like paid advertising or recruiting by phone bank. In contrast, nonprofits still rely to a large degree on word of mouth.

As nonprofit colleges have moved into online education, most have tapped technology vendors to help them do it. The study said these “online enablers,” such as Embanet/Compass, Bisk, Deltak, Academic Partnerships and Pearson, help colleges do much of the heavy lifting that for-profits do themselves, like course development, IT support and even generating “leads” among prospective students. That support industry will only expand, the study predicted.

“You’ve still got a lot of schools that are dipping their toes into online education,” Ross said. “There’s a significant opportunity for those schools.”

However, Ross predicted that only a limited number of nonprofits would join surviving for-profits as the established major players online. And newcomers that don’t already have a foothold might struggle to be among the “big winners” amid the coming consolidation, he said.

A few rapidly expanding online colleges will emerge from the pack, according to the study, by reaching a critical mass of revenue and brand awareness, which in turn can be used to attract faculty, improve the student experience and help develop relationships with employers. The key will be to grow fast while maintaining academic quality.

“The race is on to scale as quickly as possible,” the study said. “The winners will almost certainly be those institutions that can differentiate themselves in the eyes of students, faculty and accreditors.”

The study was based in part on July survey of 1,200 students who attend fully online programs. It found student profiles that were nearly identical at nonprofit and for-profit institutions, with similar ages, incomes and attendance patterns.

That finding didn’t surprise Carol Aslanian, an expert on online education and senior vice president of market research services at Education Dynamics, who said online students at for-profits and nonprofits are now “more alike than different.”

Geography becomes more important in this competitive environment [5], Aslanian said, and can be an advantage for nonprofit colleges.

In the past, for-profits could count on big marketing budgets to draw students nationwide. With relatively few choices of online programs that were convenient for working adults, and few obvious differences in the quality of online providers, selling was more about volume than the pitch. And prospective online students have not been particularly discerning consumers, according to the study.

About 50 percent of students apply to only one online institution, the research found, and fewer than one in five applies to three or more institutions. Those numbers have been relatively consistent over the years, said Ross. That may soon change, however. 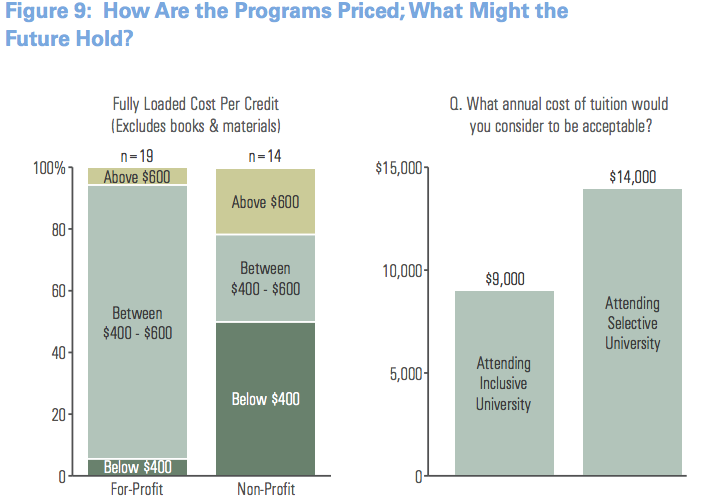 [6]Some nonprofits are already upsetting the balance of pricing online (see graphic). Most for-profits charge $400 to $600 per credit, the study found. But several nonprofits charge less than $400. Tuition at Rio Salado, for example, ranges from $76 per credit for residents of Maricopa County (the college’s home district), up to $317 per credit for some out-of state students.

In addition, selective nonprofit colleges might be able to get away with charging more than for-profits. That’s because students are willing to pay more for a strong brand. The survey found that students enrolled at selective institutions said they would pay almost $5,000 more in annual tuition for an online program than would their peers at open-access institutions.

Most for-profits are struggling in the recession’s wake and after the latest federal regulatory crackdown. Enrollments have plummeted at many of the national chains. The shake-up over attracting students will get even more interesting, Aslanian said, if public universities with strong regional brands go big online.

For example, the University of Nebraska can wallop all comers in its backyard, she said, whether for-profit or nonprofit.

“This is going to be a regional ballgame,” she said, and “a huge challenge for the for-profits.”

Online Bachelors Degree Programs in Accounting That are the Least Expensive