Below, the chart displays the tuition range for colleges offering online political science programs at the bachelors level from most to least costly: 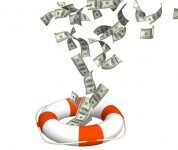