Making Timely Student Loan Payments? You May Be In Default, Anyway 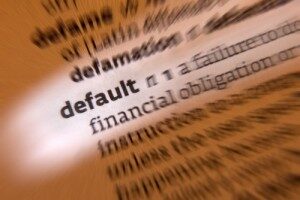 Many private student loan contracts include clauses that allow the lender to demand the full loan balance if a borrower’s co-signer dies or files for bankruptcy, leading lenders to place loans in “auto-default” even if the borrower hasn’t made any missteps, according to the Consumer Financial Protection Bureau’s mid-year report issued this week.

CFPB does not say in the report how often lenders actually demand a borrower’s full loan balance, but said it’s heard an uptick in complaints on the issue over the last two years. And 90 percent of private student loans were co-signed in 2011 – and though contracts allow borrowers to remove co-signers from a loan, it can be a complicated and difficult process.

Consumer Bankers Association President and CEO Richard Hunt denied that placing borrowers into “auto-default” is common in a statement . Hunt said he believes it’s a “rare occurrence,” according to an excerpt posted by POLITICO.

WASHINGTON (AP) — Some student loan borrowers who had a parent or grandparent co-sign the note are finding that they must immediately pay the loan in full if the relative dies.

The Consumer Financial Protect Board says lenders have clauses in their contract that explain this could happen, but many borrowers are not aware of them.

The agency’s ombudsman, Rohit Chopra, said complaints related to this issue are growing more common because the practice is catching so many consumers by surprise. Some borrowers told to pay back the loan in full have been making timely payments, Chopra said.

“We do have some concerns that with an aging population and with very long terms on certain private student loans, that this could actually increase over time,” Chopra said.

The issue doesn’t impact federal student loans, which are more commonly issued than private student loans. In the private loan industry, 90 percent of loans were co-signed in 2011, and having a co-signer can often lead to a lower interest rate, a report released Tuesday by the bureau said. Before the financial meltdown of 2009, private loans were more commonly issued, but many borrowers still owe money on them. They generally have higher interest rates than federal loans.

In response, Richard Hunt, president and CEO of the Consumer Bankers Association said in a statement that its members work with their customers “carefully and compassionately” and it is common practice for the lenders to release co-signers from loan obligations.

“We are not aware of lenders accelerating the payment of a loan in good standing upon the death or permanent disability of a co-signer as a typical practice and believe it to be a rare occurrence,” according to the statement.

Chopra, however, said even as many financial companies advertise the ability to release a co-signer from a loan, they make it complicated to do so. He didn’t specify the number of complaints the agency received.

The report said the practice might occur because some lenders rely on third parties that automatically trigger a default “regardless of individual circumstances.”

“While these acceleration options may have a legitimate business purposes, it seems that private student lenders and servicers may not always be acting in their own self-interest by accelerating balances and placing loans in default,” the report said.

The co-signing issues impacting private student loans are generally different than those associated with loans such as a mortgage because collateral like a house is not put down to obtain the loan.