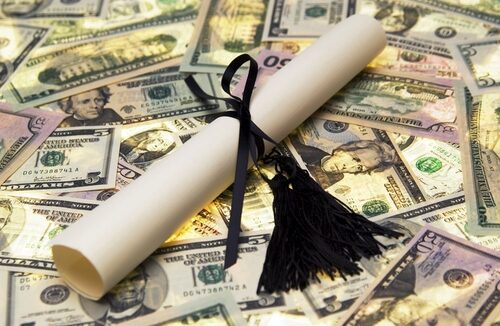 After letting the student loan interest rates double through inaction on July 1, federal lawmakers scrambled — amidst a public outcry — to rectify the situation. Within a month, Congress had drafted, passed and sent to President Obama a law that would reduce the rates from what they were about to become to something considerably more manageable. A win for students, right? Yes, more or less.

Students will be paying more interest on federal student loans than they had been over the last several years. What’s a little more interesting is that the new law is a fiscal win for the federal coffers: the new student loan rates are expected to funnel more than $700 million in additional profit into the federal government’s wallet over the next 10 years, a new analysis shows.

The law, regulating interest rates for federal student loans, was passed by Congress and signed by President Barack Obama this summer. It was hailed by politicians on both sides of the aisle as a win in the campaign to combat a rising tide of student loan indebtedness.

Though the law will accomplish that in the short term, it also guarantees profits for the government every year for the next decade and, starting in 2016, increases those already high profit levels, a mid-August report from the nonpartisan Congressional Budget Office shows.

In total, the CBO projects the government to clear $175 billion in profit over the next decade on student loans. The CBO analysis comes as millions of students and their parents are signing loan documents heading into fall.

It also comes as the President, once again, hits the road with a plan to lower college costs and decry the rising levels of debt students carry upon graduation. A report issued in mid-August by the U.S. Department of Education shows that 57% of students received some sort of federal aid, and 41% of all undergrads had taken loans, up from 35% four years ago. The average debt for a college graduate in Michigan is slightly more than $26,000.

Nationally, there’s more than $1 trillion owed in student debt —more than what Americans owe on credit cards —- with more than $180 billion of it in some type of default, according to government data.

The law set rates for all the loans at different levels, but based them all on the 10-year Treasury rate and allowed rates to change each year.

For loans taken out last school year, the rate for subsidized Stafford loans was 3.4%. This year, it’s 3.86%. However, without some sort of congressional action, that rate would have been 6.8%.

Because this year’s rate dropped under the new law, politicians were quick to praise themselves.

But the CBO analysis shows it’s only a short-term win for students and families.

While the CBO projects profits for the government each of the next 10 years, it shows that starting in 2016, the profit level will increase. The CBO’s projections look at how much money the federal government will have to subsidize the program. A negative subsidy exists when there’s more money coming in than going out, CBO officials and financial aid policy experts agree.

The CBO projections show an average subsidy rate of just over negative 20% for each of the next 10 years. That means the government will have 20% more coming in than going out. That’s an increase of 2 percentage points over what would have been coming in had Congress not passed this law.

The government will particularly increase its profits on parent loans, with an average increase of nine percentage points each year between 2013 and 2023.

As a July 1 deadline to stop the interest rates on subsidized Stafford loans came and went, a number of plans were floated by members of Congress and the Obama administration.

They ranged from just freezing rates at the lower rate for a year to a complete overhaul of the system.

But in the process of coming to a compromise plan, it became clear that whatever was passed had to be revenue-neutral, several experts said. That meant the plan had to at least match the profit levels projected by the CBO for what would happen if rates had increased on July 1.

At least one plan believed to be on the path for approval was scuttled at the last minute because it didn’t raise enough money.